The biggest and the most powerful space telescope in the world,

was launched by NASA some days ago.

Using this, you can time travel of sorts.

I mean, it isn't possible to go back in time,

but with this, you can get a glimpse of history.

And I'm not talking about the history made in the last 5-6 years,

literally, millions and billions of years' history can be looked at using this telescope.

The universe began with the Big Bang 13.8 billion years ago.

And this telescope can look till 13 billion years ago.

About 0.7 billion years after the universe began.

But how can it be possible?

"Liftoff from tropical rainforest, to the edge of time itself,

James Webb begins a voyage back to the birth of the universe."

"Nature has its way of being even more creative than we are.

So we have always been surprised by what we see in the sky.

That's why building a telescope has always been interesting."

"I don't think that human beings must learn about space. But it will be foolish and shortsighted not to do so.

It may hold the key to our survival."

The most special thing about this telescope is that

it has been designed mainly to detect infrared light.

When you look at the sky, with a normal telescope,

you see the wavelengths of visible lights.

The light that you can see with your naked eye.

Do you remember studying Electromagnetic Spectrum in school?

The Electromagnetic waves in a broad spectrum.

and in there, there is a small range of visible light.

The light that we can see with our naked eyes.

The normal telescopes that you can buy at any shop,

help you look only at the wavelength of the visible light.

The range of visible light is between blue colour to red colour,

and red has the biggest wavelength.

And as you know, with electromagnetic waves,

the bigger the wavelength,

the easier it is for the electromagnetic waves

to pass through any object or obstacle.

The radio that you listen to.

The wavelengths of radio waves may span more than kilometers.

For this reason, you can listen to the radio waves that pass through buildings even.

The wavelengths of infrared are bigger than that of red.

But we can't see infrared with our naked eyes.

The advantage of using a telescope

for looking at infrared can be seen.

The photo was taken by the Hubble Space Telescope.

The most powerful space telescope we had till now.

You can see the space dust in it.

And you can see the clouds of gases forming.

But infrared wavelength can pass through the dust and clouds

and we'll be able to see what lies behind this.

The picture on the right is what we imagine

we would be able to see with the James Webb telescope.

Basically, you can say that

This word comes from Latin,

So Infrared literally means Below Red.

Because its frequency lies below that of red.

And frequency is inversely proportional to wavelength.

Anything that radiates heat,

each of these emits infrared waves.

That's why in night goggles,

Through the night vision goggles, you get a view like this.

It is captured by infrared cameras.

Since the telescope will look at stars and galaxies of stars, and planets,

all of which radiate heat,

it'll be possible to capture and look at the infrared waves.

The other advantage of infrared is that

when a telescope looks at stars at such a distance,

stars that are billions of kilometers far from us,

when the light from those stars reaches the telescope,

the light has traveled such a distance,

that by the time it reaches here,

and as we know the universe is slowly expanding,

the wavelength of the light gets stretched.

The wavelength gets elongated.

This phenomenon is known as the Red Shift.

That the wavelength of the light has stretched a bit,

and has shifted towards the colour red.

the bigger the mirror they are equipped with,

the more light they'd be able to capture.

And the resolution of the image that we get will be that much higher.

That's why, with the creation of more and more advanced telescopes,

they are being equipped with bigger mirrors.

The mirror of the Hubble Space Telescope,

was of this size.

And you have the mirror of the James Webb Space Telescope beside it.

This entire mirror is plated with 24karat gold.

Because gold is the best at reflecting red light.

Because of gold, the reflectiveness of this mirror is at 98%. 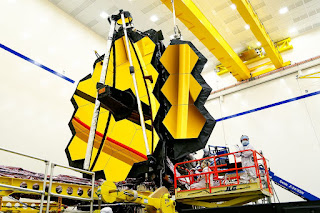 I said that everything that radiates heat

When the telescope will start working,

the telescope will radiate some heat too.

Some infrared waves will be emitted from within the telescope.

It'll interfere with the waves coming from the galaxies

and we wouldn't be able to get good high-quality pictures.

this James Webb Telescope will work only at the cold temperatures of -223°C.

The temperature needs to be so low for it to work.

On Earth, the temperature hasn't fallen below -89°C.

So how could this telescope be kept so cold?

It is possible to do it in space.

It is possible because it is very cold in space,

If sunlight falls on you in the space,

the temperature would rise rapidly.

As is the case on the moon.

Because there isn't any atmosphere on the moon,

The temperature may fall to -170°C there.

But as soon as there's sun,

the temperature rises to 120°C.

It is very problematic for this telescope.

No sooner would sunlight fall on this telescope

it would be problematic as everything would heat up rapidly.

So they needed to stop the Sun.

To avoid this problem,

a Sun Shield has been installed on this James Webb Telescope.

This Sun shield is in the shape of a kite

and is as big as a tennis court.

So the telescope could remain protected from the Sun.

For this, a very special material has been used,

Several materials were tested to see

which material could be used to block the Sun most effectively

and to keep the telescope cool.

It was later discovered

that Kapton was artificially created.

This Sun Shield comes with 5 layers of Kapton,

and each layer is thinner than a strand of human hair.

There's a vacuum gap between each layer.

So that its effectiveness could be increased.

Apart from this, each layer has an aluminum coating on it.

And the two layers closest to the Sun

have a coating of doped silicon.

This space telescope isn't being deployed near the Earth,

as the Hubble Space Telescope was.

Hubble is close to the Earth and orbits around it.

But this will be deployed 1.5 million kilometers away from the Earth.

At the point known as the L2 point.

This point will be on the other side of the Sun

as much as possible for the better functioning of this telescope.

And the L2 Point is special because

it keeps revolving with the Earth.

So the Sun will be hidden throughout the revolution.

Look at how its orbit will be.

The Earth's shadow will keep the Sun hidden.

It's similar to when you look at something in the direction of the Sun,

you can't see clearly because of the sunlight.

It's the same as when you cover the Sun with your hand.

And you get to see clearer.

It's the same with the telescope.

that they have identified more than 300 potential problems that may arise.

More than 300 single points of failures,

if any of them come true,

then the entire project would be as good as over.

$10 Billion has been spent on this project.

This amount is so huge that

and direct the money to this project to make it possible.

Along with NASA, the European Space Agency

and the Canadian Space Agency are also participating in this.

The scientists have pinned their hopes that

using this, they would be able to study

how did stars and galaxies form after the Big Bang.

As I told you, with this telescope, you can look 13 billion years into the past.

could look to only 1 billion years after the Big Bang took place.

But the James Webb Telescope can look to 0.3 billion years after the Big Bang.

As you can see in this diagram.

When the stars began to form first.

You'd ask how is it possible to look into the past?

The answer to it is very simple.

The light takes some time to travel the distance.

And by the time the light reaches from one place to the other,

a lot of time would have passed.

Especially when it involves distances this large.

The light from the Sun reaches the Earth

It means that if the Sun vanished suddenly, for example,

it will take 8 minutes for people to find out on Earth,

to see that the Sun has disappeared.

In a way, you can say that we are looking 8 minutes into the past

when we see the Sun.

Similarly, apply this logic on a large scale.

The stars and galaxies that are millions of light-years away from us,

when we look at them through the telescope

or we gaze at the stars from the Earth,

we are actually seeing them as they were millions of light-years ago.

The universe is so huge that

some stars are 13 billion lightyears away from us,

by the time their light reaches Earth,

13 billion years would have elapsed,

and what we get to see today,

are the events of 13 billion years ago.

This way we can get a glimpse of history.

theoretically, it is also possible that

if we go 100 million lightyears away from the Earth,

we teleport to a planet that is 100 million lightyears away from the Earth.

And on that planet, we build a very powerful telescope and look at the Earth,

we'll get to see the Earth as it was 100 million years ago.

We'll get to see dinosaurs!

But the practical problem to doing this is that

by the time we go to the other planet and look back at the Earth,

it will take a much longer time to reach the other planet,

then then the years that we can look back to.

So if it becomes possible to travel by teleporting,

we'll be able to watch history occurring on the Earth.

And would actually be able to time travel.

Additionally, it will be also interesting to see

the new planets that the James Webb Telescope discovers.

Can it find a planet with Earth-like conditions?

Where life can be possibly found.

If you did, you can read more blogs on Space Tourism as well

if you are interested in the field of space.

And you can check out my other science-related blogs