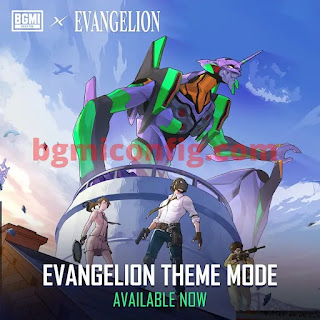 The new 'Core Circle' game option is now available on the bgmi Version 2.0 Livik and Erangel maps. In Erangel from May 19th until June 19th, players can watch EVA-01 take on EVANGELION's 6th Angel in a special event. This option is only available for 30 days [1 month].

As part of the new Version 2.0 Update, BATTLEGROUNDS MOBILE INDIA (BGMI) has introduced a new limited-time game mode inspired by the renowned and acclaimed anime series EVANGELION pitting players against its deadly Angel.

Livik and Erangel will get the new 'Core Circle' game mode. In Erangel from May 19th until June 19th, players can watch EVA-01 take on EVANGELION's 6th Angel in a special event.

The main mode of BGMI is evangelion. Players will begin each battle in a special smaller Blue Zone, where they will witness the 6th Angel appear on Spawn Island and fire a strong laser. The activity can be followed by looking for EVA-01's spawn place on the mini-map and following the Angel's deadly course ahead.

Fortresses will open fire on the Angel to defend the island until it unleashes its full force on them. After the strongholds have been demolished, players can scavenge through the wreckage for better supplies and alter the structure of the fortress walls to suit their own battle strategies.

Why did BGMI add core Mode

So that players can prepare for an exciting month of gameplay as the South Korean game developer marks the first anniversary of BGMI this month.

Furthermore, the update includes a number of control improvements, including improved haptic feedback and lots more

BGMI is only available in India on the Play Store and App Store.

1. In the official Livik Map, players can engage in fights like never before.

4. A slew of new XT weapons have been released.

5. As they face difficult terrain, players must combine tactics and techniques.

6. With the introduction of new advanced supply zones

7. Players can search among a variety of crates for supplies to last them till the finish of the game.

8. With the feature of emergency pickup,

10. With the help of the Revival Tower, gamers can also bring back fallen teammates.

NOTE:Players can score goals on the newly added soccer pitch to gain extra goods as they navigate treasure maps to reach rare supplies and travel from place to place utilising an all-new zipline.{codeBox}

The Core Circle mode, which is inspired on Japanese folk entertainment Evangelion, offers players new skins, awards, and progress-based incentives. Erangel and Livik both have the new mode mechanism, and Erangel also has fascinating bouts between EVA-01 and Evangelion's 6th Angel to see. Players can access the theme through in-game discovery events, and those who participate after May 14th will earn additional progress benefits.

What Upgrade and changes in Core Mode Review:

In addition, the upgrade includes Some of the most important controls enhancements are:

Sponsor match feature support, such as the addition of a button to spectator mode to promote an even more engaging gameplay.

The 1.6.0 Update is coming this September!

Battleground Mobile India is Available on Play Store since 2021

Yes, You can Download PUBG PC on Stream Officially.

Can you play battlegrounds on mobile?

Yes, we can play Battlegrounds mobile india from mobile Which is Available on Play-Store and App-Store