BGMI banned In India: Read Google and Krafton's statement on the unban

September update BGMI banned In India Read Google and Krafton's statement on the unban
Government of India has issued a ban on the popular battle royale game Battlegrounds Mobile India (BGMI) from South Korean game maker Krafton. The app has been removed by both Apple and Google app stores in India. While the BGMI app is no longer listed on Apple App Store and Google Play Store, the government so far has not made any statement on the banning of the BGMI app. Both the ministry of home affairs (MHA) as well as the Ministry of electronics information technology (MeitY) have not officially said anything about the ban on the BGMI app. 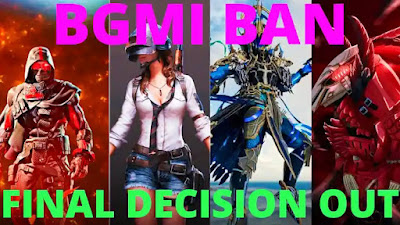 What did Google say ?
Google spokesperson confirmed that the app has been delisted after orders from the government. "On receipt of the order, following the established process, we have notified the affected developer and have blocked access to the app that remained available on the Play Store in India," said Google in a statement from Google.
What did Krafton say
Krafton on its part said that it is clarifying the ban with the government. "We are clarifying how BGMI was removed from Google Play store and the App store and will let you know once we get specific information," reads Krafton's statement.
How PUBG became BGMI ?
BGMI's removal comes almost two years after the ban on PUBG. The popular Chinese game was banned along with 100-plus other apps in September 2020. PUBG was banned for its affiliation with Chinese publisher Tencent Games. These apps, as per the government, were engaged in activities prejudicial to the sovereignty and integrity of the country also posing serious threat to Security of the State and defense of India. The government said that these apps can carry out espionage and surveillance activities via camera/mic, accessing fine location (GPS) and do malicious network activity similar to previously blocked apps.
Read More: BGMI WALLPAPERS FOR ANDROID
The ban on PUBG was a severe blow for Krafton as India was one of the biggest markets for the game maker. There were various PUBG tournaments organised in India. Post the ban on PUBG, Krafton cut its ties with Tencent Games. The company announced that China's Tencent Games would no longer be authorised to distribute the PUBG MOBILE franchise in India. In July 2021, Krafton launched BGMI with tagline 'India ka Battle Grounds'. Earlier this month, the game hit 100 million registrations mark in India on Google Play Store.

When did BGMI unban?

There is not any official announcement regarding unban of BGMI. This ban looks like it's is a temporary ban it will be removed soon. As per local news it will be unban on 1 September 2022.
Why i am facing Lag after 15 August?
As we know Krafton company is removing it's BGMI severs from India as per government order.and BGMI users are demanding for unban.
[Personal Review] Should BGMI be banned in India ?
No, As per current scenario of india most of youth are highly addicted to this company products such as BGMI ,BGMI new State etc. But also most of them are performing beast mode in competition with other countries. Some of Teams which are representing india are GODL (Jonathan Team), TSM (Scout Team). Girls are also performing well and representing India.

As per BGMI official there is not any notification regarding Ban or Unban. But it is estimated BGMI 2.2 Update
If you like the post if really helpful then, comment below. This will motivate me